“This album is like a book of stories that happened in my life, and what you can hear there is actually my inner voice narrating those stories through the medium of music.” – Pedro Martins

VOX features Martin’s prolific multi instrumental capacities; On this record he plays guitar, piano/synths, bass, drums, percussion, flute and sings in a beautiful seraphic falsetto. He is also the principle composer, arranger, and wrote most of the lyrics on the record. All together, VOX is a deeply personal and complex journey where the listener is invited to join Martins in his wonderful world of sound and story.

“With Rosenwinkel’s involvement, friends like drummer Antonio Loureiro and bassist Frederico Heliodoro in the mix, and pianist Brad Mehldau and saxophonist Chris Potter dropping by as guests, Martins successfully laid out his conscious and subconscious thoughts for all to hear. The album is pointedly intimate throughout, but nowhere more than during the dizzying swirl of “Venus 13”—a coital confession tied to an early relationship. Elsewhere, as on the Potter-enhanced “Faces,” which explores a “deeper layer of communication” within gazs and guises, and the dream-inspired “Horizonte,” driven by a weighty yet motile 16th-note groove and set aglow with flitting lines, Martins capably bridges the personal and the universal. At certain moments, his love of the culture and music of the Brazilian state of Minas Gerais—the work of Milton Nascimento and Toninho Horta, for example—is revealed. But regardless of specific influence, intent, or origin, all of Martins’ music reflects his own singular voice and experience. “Writing songs is a way of confessing something,” he says, “a way of conveying all the love I feel about something. I try to write songs that really come from a genuine feeling.” ” – Dan Bilawsky, JazzTimes 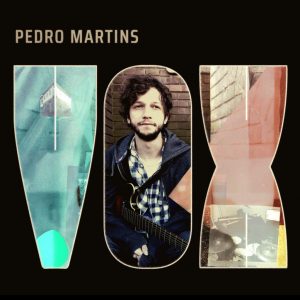